Words You Just Love To Read

It's hard to put your finger on why, but some words are just beautiful. These are some of my favorites to see on a page. 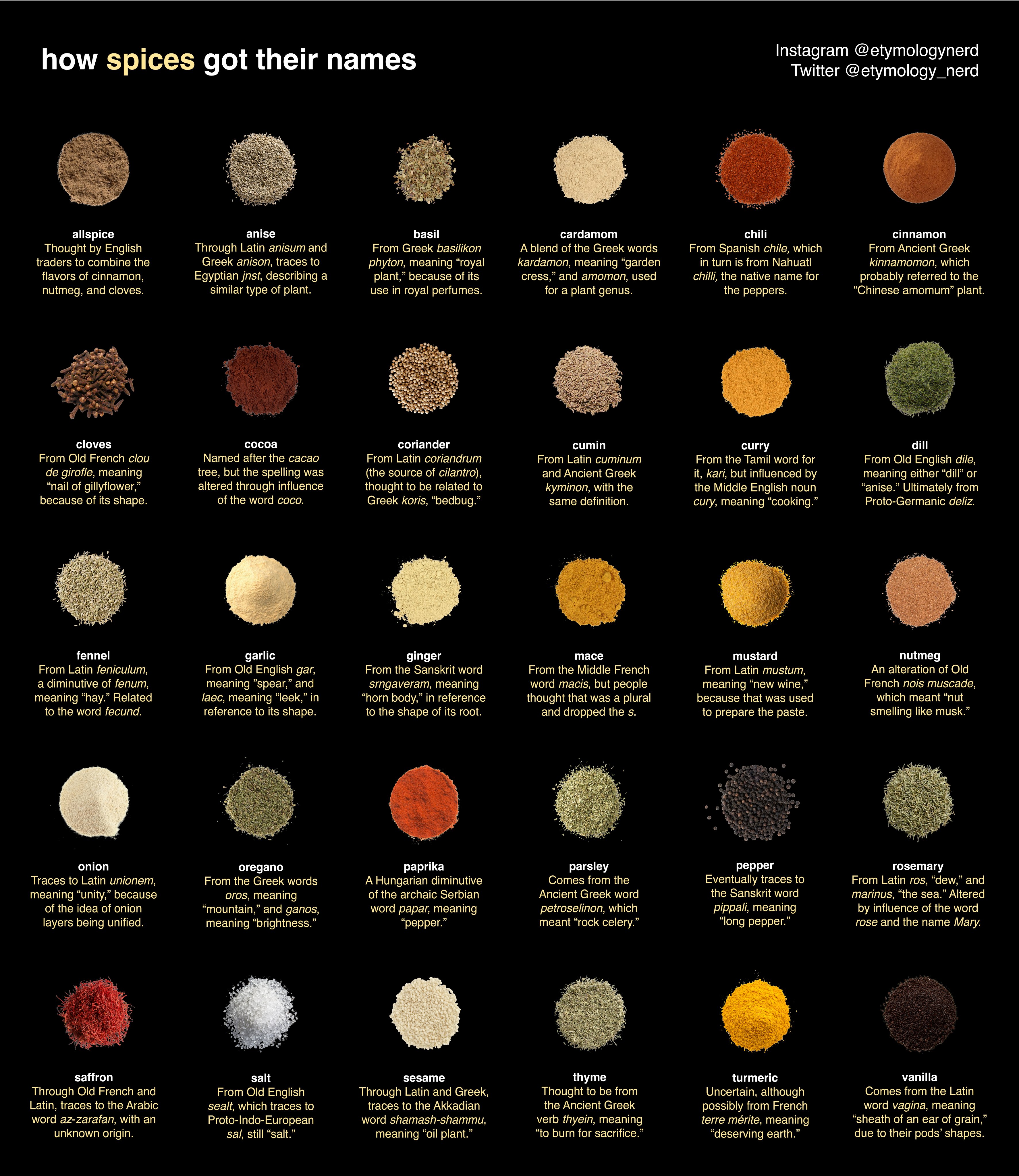 Loving this infographic showing the etymology of the spices, created by @etymology_nerd.

The award for Most Enlightening goes to the origin of vanilla, but my favourite is the etymology of basil coming from the Greek for royal plant.

Words That Put People Off in a Job Posting

It's hard to recruit good people, and these words and phrases are guaranteed to put off applicants. Avoid where possible!

You can understand
where the fans were coming from.
Adele built her empire on heartache:
moving reflections of pain and its aftermath,
like finding "Someone Like You,"
or merely saying “Hello” to an ex
after years have passed.

At the time they announced their breakup,
nearly four years had passed
since Adele's last album,
and her audience was hungry
for something new.

And what’s a better album prompt
than a high-profile divorce?

Found in Rolling Stone (thanks to Floss for sending it in).

A Brief Introduction to Folk Etymology

Some words in English just ... appear from nowhere, absent any obvious lineage or rhyme or reason. Luckily for amateur etymologists, some come via far more obvious, traceable routes. Sometimes this is via what at the time would be considered mistakes, but that eventually became accepted parts of the English language.

When Do Linguistic Mistakes Matter?

It's very easy to get worked up about people getting things wrong. Sometimes maybe too worked up ...

But languages do evolve over time, and today's mistakes are tomorrow's Shakespeare's new words. What is important is whether or not the person listening to, or reading, the words understand them. If they do, then you have communicated successfully, and that is the goal of language. If the mistake introduces confusion, it's worth correcting. Otherwise, when you hear a mistake that might just be an opportunity to get on a bandwagon before anyone else, like a sort of linguistic hipster.

Rebracketing: Napples and Nuncles and Ewts and Doodles

The most well-known examples of this are words where an "n" has moved between the word and its indefinite article - a or an. So what once was a napple became an apple, a nuncle became an uncle, and an ewt became a newt, and an ekename became a nickname. An umpire comes from the word noumpere, and an apron used to be a napron.

This can happen with suffixes too. Consider the Labradoodle, the offspring of a Labrador and a Poodle. The "d" at the start of "-doodle" clearly comes from the Labrador. And yet, the suffix "-doodle" has made it to other Poodle crossbreeds like the delightful Goldendoodle. Something similar happened with the Hamburger. It is named after Hamburg, where it originated, but the word burger became such a common abbreviation that to many it appears as though burger came first and hamburger has been formed by adding ham to the front of it.

Incidentally, Hamburg is a delightful name for a city. Ham is a city and Burg also means city, so its name is effectively ... Citycity.

Sometimes the entire article moves into the word, or two words completely fuse into one. The modern word alone derives from all one, which means the expression all alone is effectively all all one. This is even more common in loans words, where misunderstandings about where word boundaries are can lead to words being joined. The Arabic al-jabr is the origin of the modern algebra, but the al in Arabic is the, and words like alcohol and alchemy also absorbed the Arabic the. The same is responsible for alligator, which comes from el legarto in Spanish, where el again means the.

Back-Forming: Peas and Edit and Statistic and Bicep

The first cousin of rebracketing is back-forming, where a word is borne out of assumption. It can be where a word is assumed to be plural because it ends in an "s" sound, and therefore the same word without an "s" is the singular. For example, once upon a time a pea was called a pease, and peas were peasen. However, lots of people heard the "s" sound at the end of pease and thought that the singular must be pea. And so, one pease became one pea, and many peasen became many peas. Dinners must have been confusing for a while.

Similarly, statistic comes from the misinterpretation of the field of statistics as a plural word ... which then generated its own plural, statistics. The muscle at the top of your arm - singular - is your biceps. But as with pease, it has been mistaken for plural and the singular has become bicep. The plural is bicipites.

The word editor gave rise to the verb edit, when people assumed the "-er" sound at the end meant it was a person who did the verb, so an editor must be someone who edits in the same way that a writer is someone who writes. The origin of lase is even stranger, and happened extremely quick in linguistic terms; what started as the acronym LASER turned into the simple noun laser, which then back-formed the verb lase.

While there is no way to be certain what the future holds for any language, one way to see what might happen in future is to look at common mistakes today. Today's a napple is tomorrow's an apple, after all. I think these words are likely to be a formally recognised correct part of English in the next few decades, so if you want to look cool to the linguists of the future, make sure to use these as often as possible:

There are as many ways to get from A to B as there are Bs to get to from A. Here is a collection of them, verbs to get you moving.

Why English needs The Subjunctive Tense

1. Emotional expression: As English speakers, we are a quite dull set of people. We only need to look at foreign language films to realize the speakers of our sister languages are more passionate about their speech. Well, a primary use for subjunctive in a language is the expression of emotion. Wouldn't it be wonderful to tell a person's emotion by the type of verbs they use? Wouldn't it be wonderful to spice up your vocabulary by adding in a bit of passion when you make a request?

2. Dropping hints: How many times have you tried to subtly suggest someone purchase a gift? Or drop a hint to a significant other about a particular date night. Since the subjunctive expresses desires, terms like "I wish," or "I strive," maybe even, "It'd be wonderful," would require a different verb form. That means no more grey areas or mixed messages.

3. Adding spice: Let's face it, English can be a dull language when compared to French or Spanish. With the subjunctive, we could spice up our sentences by adding certain key phrases to trigger use of the subjunctive mood. For example, in French one might say il est évident qui'il m'aime.Translation, it's obvious he loves me. That has more flavor than just saying, he loves me. If the use of the subjunctive in English were more prominent, it would go a long way to improving the average English speakers vocabulary.

4. Learning a foreign language would be simpler: Anyone who's taken a university, or high school foreign languages course knows learning a new language is an uphill battle. Not only do you need to learn new grammatical concepts, but also vocabulary and pronunciation. If English had a defined subjunctive mood, it might go a long way in helping students understand concepts in other foreign languages.

At the end of the day, languages are fluidly evolving things, and while we might not be able to revive or deepen the English subjunctive mood, we could all make an effort to use the subjunctive by learning new languages. Exploring new horizons, discovering new ways to convey our emotions, and deepening our understanding of other cultures would go along way in helping us all.